The Economic and Commercial Impact of Pandemics:

By now, the COVID-19 influenza outbreak has reached practically all parts of the globe. In the context of discussing the pandemic, it serves no purpose to focus on the fact that scientists, medical professionals, public health experts and a handful of concerned economic institutions and businessmen have been telling us this was likely to happen for at least a decade. A tempting but perhaps facile way to deal with this is to place blame on government officials, industry leaders and health insiders that knew something like this could happen. But then, that would only tend to distract our attention from focusing on the real task at hand – to collectively as members of humankind combat the virus. After all, the virus did not attack just China, nor did it attack just Europe, the United States or other countries, it attacked all humankind and that is how the battle should be fought.

It now seems certain that countries across the globe are realizing that in spite of the last 60 years of radical changes in human health and advances in medical science, health methods focused only on specific health impacts while the larger picture went unnoticed. Even more striking, these advances have only had limited success in combating the seasonal flu and even less in combating high pathogenic avian influenza viruses. Why is that with all the technology we have at our disposal? What is the problem – funding, research?

Pandemic influenzas carry with them serious impacts to the modern globalized economy by the fall in labor supply, the avoidance of public places and events, school closings, and social distancing to mitigate the spread of disease. But these are only a few factors that impact a country’s economy. As mentioned earlier, in 2005, the World Bank estimated that a global influenza pandemic could cost the world economy an estimated $800 billion and kill tens of thousands of people. The U.S. Center for Disease Control and Prevention (CDC) estimated deaths could reach as many as 207,000 and cost to the U.S. economy in the range of $166 billion. While the U.S. Department of Health and Human Services estimated up to 1.9 million deaths could occur with nearly $200 billion in costs to the U.S. economy.

Despite the foregoing, these estimates, at least in terms of projected economic costs, are not even close. For example, the U.S. has tried to alleviate the economic blow with 2 trillion in new spending. Another 3 trillion is being considered (at the time of this writing). Based on economic forecasts, the impact to GDP is estimated at negative 0.4% to negative 0.5% with the largest plotted impacts resulting from extended school closures to negative 5.8% to negative 7.9%. According to the U.S. Bureau of Economic Analysis, the U.S. for the 1st quarter of 2020 has hit an unprecedented low of negative 4.8% already with only 3 months into the pandemic. The U.S. Commerce Department stated that consumer spending, which accounts for two-thirds of the U.S. economy, dropped to negative 7.6% in April 2020.

To get a good understanding of what we are really dealing with, there are a number of industries economically impacted by the outbreak. The relatively large number of industries impacted only tends to dramatize the effects of the pandemic’s broad coverage. For example, crops, livestock products, minerals, animal products, other food products, beverages & tobacco, manufacturing, machinery, luxury products, utilities, construction, trade, sea transport, air transport, other transport, hotels, restaurants, communications, and insurance are all hard hit by the impacts of the virus. Insurance companies are particularly hard hit because of the increased number of deaths and re-insurance may be particularly difficult in the future due to large losses. With respect to the effect on the labor force, in the U.S. at the end of April, more than 30 million people filed for unemployment – about a 14% unemployment rate. However, forecasters expect by end of June 2020, the unemployment rate will be close to 30%. 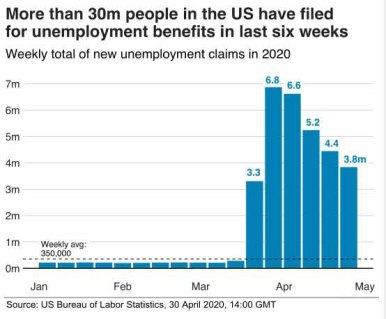 Politicians, economists, and business leaders are confronting the fact that mass bankruptcies, empty planes, cautious consumers, and even a rise in taxes may be the scenario going forward. At this point, bankers are expecting a cascade of bankruptcies to hit the American economy. Of the 30 million small businesses in the U.S., about 25% of those businesses are expected to close before the end of the year. They also see the probability of long-term impacts on Americans in terms of their unwillingness to take public transportation, fly, or travel. Of greater immediate concern is talk that taxes will have to be raised to pay for emergency efforts to rescue the economy. The impacts of these scenarios are fairly similar across the globe. However, for the most part, government expenditures depend on the magnitudes of scenarios and each country’s patterns differ. Already, the Chinese economy has shrunk by negative 6.8% and Germany’s economy could shrink to negative 6.3%. 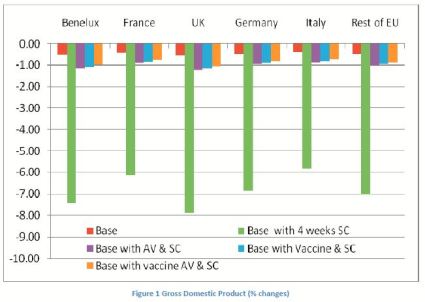 The Central Banks in many countries have already taken a number of emergency steps to shore up their country’s economies. In the U.S., for example, Federal Reserve Chairman Jerome Powell stated that the withdrawal from many types of economic and social activity to help slow the spread of the virus caused a downturn that is without modern precedent, significantly worse than any recession since World War II. Also, he stated that the “Federal Reserve has acted with unprecedented speed and force.” He cites how the Fed has made outright purchases of Treasuries and mortgage-backed securities; providing liquidity and funding measures including expanded swap lines with foreign central banks; facilitating support for the flow of credit to households, businesses, state and local governments; and temporary regulatory adjustments to allow banks to expand their balance sheets.

Finally, Powell warns us that deep and long recessions can leave lasting damage to the productive capacity of economies. Also, he states that long-term unemployment can damage worker’s careers as skills lose value, and professional networks dry up leaving families with huge debts. Probably the most startling statement is that a prolonged recession and weak recovery could damage business investment and expansion limiting the resurgence of jobs, growth of capital stock, and the pace of technological advancement.

View all posts by Neil Turner